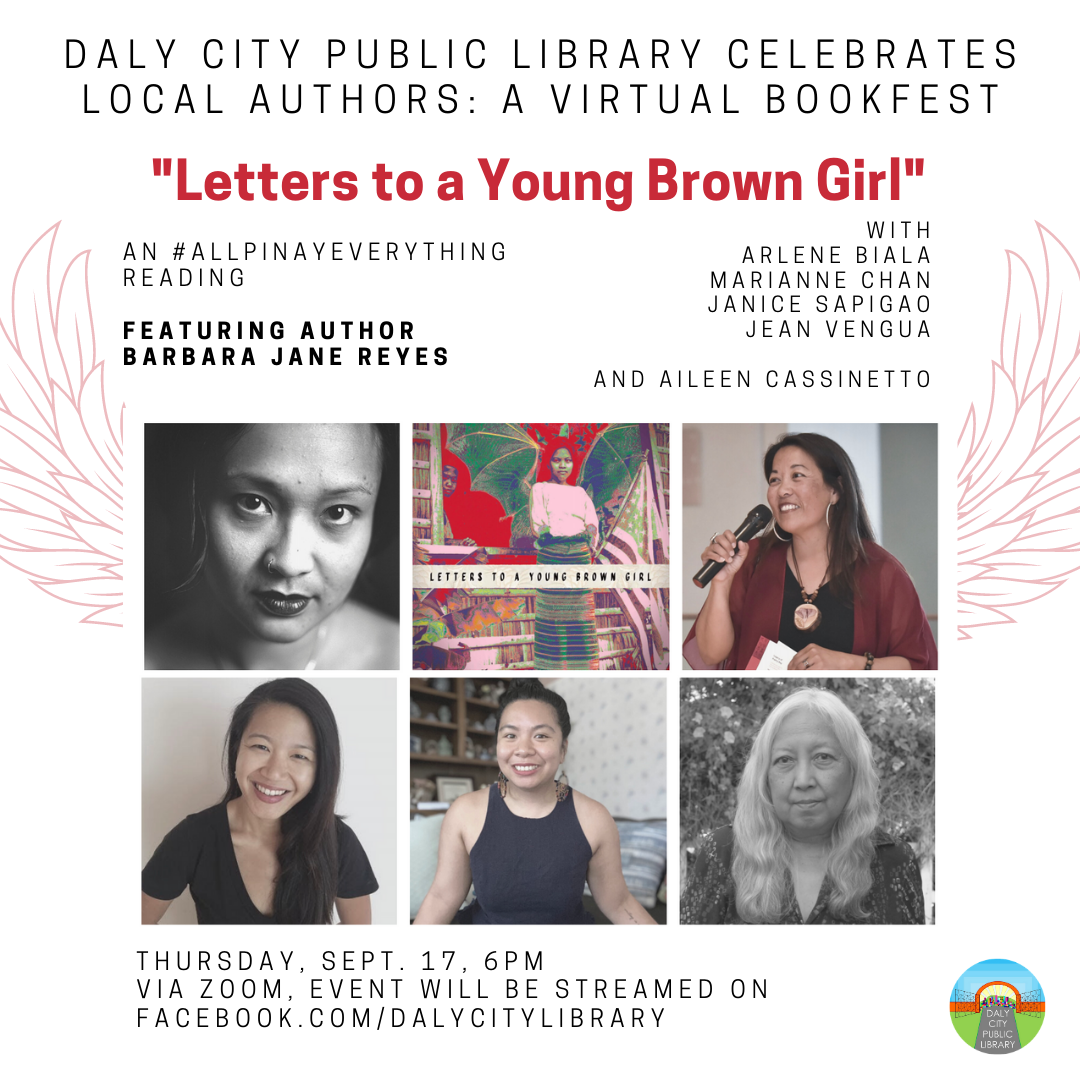 BARBARA JANE REYES is the author of "Letters to a Young Brown Girl" (BOA Editions, Ltd., 2020). She was born in Manila, Philippines, raised in the San Francisco Bay Area, and is the author of five previous collections of poetry, Gravities of Center (Arkipelago Books, 2003), Poeta en San Francisco (Tinfish Press, 2005), which received the James Laughlin Award of the Academy of American Poets, Diwata (BOA Editions, Ltd., 2010), which received the Global Filipino Literary Award for Poetry, To Love as Aswang (Philippine American Writers and Artists, Inc., 2015), and Invocation to Daughters (City Lights Publishers, 2017).

She is also the author of the chapbooks Easter Sunday (Ypolita Press, 2008), Cherry (Portable Press at Yo-Yo Labs, 2008), and For the City that Nearly Broke Me (Aztlán Libre Press, 2012).

An Andrew W. Mellon Foundation Fellow, she received her B.A. in Ethnic Studies at U.C. Berkeley and her M.F.A. at San Francisco State University. She is an adjunct professor at the University of San Francisco’s Yuchengco Philippine Studies Program. She lives with her husband, educator and poet Oscar Bermeo, in Oakland.

For more information about the book: https://www.boaeditions.org/collections/poetry/products/letters-to-a-young-brown-girl

ARLENE BIALA is a Pinay poet and performance artist born in San Francisco, CA and raised in the South Bay. She has been participating in poetry performances and workshops in the Bay Area for over 30 years and was Poet Laureate of Santa Clara County for 2016 and 2017. She is the author of "bone", her first chapbook of poetry published in 1993; continental drift, published by West End Press in 1999; her beckoning hands, published by Word Poetry in July, 2014 and winner of the 2015 American Book Award; and one inch punch, published by Word Poetry in October, 2018. She received her MFA in Poetics & Writing from New College of CA, and was the recipient of an artist residency at Montalvo.

Marianne Chan grew up in Stuttgart, Germany, and Lansing, Michigan. She is the author of "All Heathens from Sarabande Books" (2020). Her poems have appeared in Michigan Quarterly Review, The Cincinnati Review, West Branch, The Rumpus, and elsewhere. She earned her MFA in Creative Writing at the University of Nevada, Las Vegas, and is currently pursuing a Ph.D. in Creative Writing at the University of Cincinnati.

Janice Lobo Sapigao (she/her) is a daughter of immigrants from the Philippines. She is the author of two books of poetry: "microchips for millions "(Philippine American Writers and Artists, Inc., 2016), which is about immigrant women workers in Silicon Valley; and "like a solid to a shadow" (Timeless, Infinite Light, 2017 by way of Nightboat Books), which is about her father, family lineage, and learning Ilokano. She is also the author of two published chapbooks, "toxic city" (tinder tender press, 2015), and "you don’t know what you don’t know" (Mondo Bummer Chapbooks, 2016), along with other self-published chapbooks. She was named one of the San Francisco Bay Area’s Women to Watch in 2017 by KQED Arts. She is the 2020-2021 Santa Clara County Poet Laureate, and a Poet Laureate Fellow with the Academy of American Poets.

Jean Vengua is a Filipinx American poet and visual artist, author of "Corporeal" (Black Radish Books), "Prau" (Meritage Press), and "The Aching Vicinities" (Otoliths Press. Chapbook). With Mark Young, Vengua co-edited the First Hay(na)ku Anthology, and The Hay(na)ku Anthology Vol. II. As co-publisher of Tulitos Press with Elizabeth H. Pisares, she published/edited the Debut: The Making of a Filipino American Film by Gene Cajayon and John Manal Castro, and The Flipside, by Rod Pulido. Jean was born in San Francisco, raised in Santa Cruz, and lives in Monterey, CA. Her art and writing can be viewed at jeanvengua.com.